Posted at 06:05h in OliveCare by Australian Olives 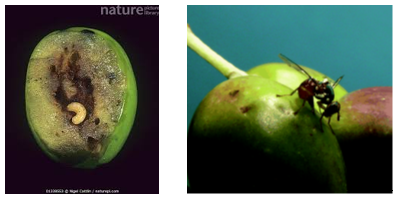 Note: A European Union-wide ban on dimethoate, one of the most effective chemical treatments that farmers have against the olive fruit fly will come into force at the end of October 2020.

Is Queensland Fruit Fly (Qfly) a pest of olives?

Whilst the potential for devastation of the olive industry resulting from an incursion of Olive fruit fly is well known, the status of olives as a host of Qfly is less well known.

It is generally accepted that under high Qfly population pressure OLD fruit fly will ‘sting’ ripe olives, and from time to time we receive reports to this effect.  However stung olive fruit will usually drop from the tree so it is not a commercial problem in terms of contamination of harvested fruit and production of tainted olive oil.

A recent scientific paper has thrown further light on the status of olives as an alternative host for Qfly, allowing Qfly larvae to complete their life cycle in olive fruit – meaning olive groves will need to be included in any national surveillance trapping and control programs:

General and Applied Entomology: The Journal of the Entomological Society of New South Wales Volume 47 (Oct 2019)

Abstract: There is limited historical information for olive fruit as a host for Queensland fruit fly (‘Bactrocera tryoni’). In 2015, five suspect samples from informal surveys of olive fruit from the Sunraysia district were examined for ‘B. tryoni’ and found positive. Larval and adult identifications were confirmed using both morphological and molecular methods. Olive fruit were found to support and produce between 3.8 and 32.5 adults per kilogram of fruit, which is comparable to some citrus. There is a need to further develop a fruit fly standard for a host susceptibility index or host potential index. If producers are developing a systems approach to manage fruit fly, they need to be aware that olive fruit can act as an alternative host for ‘B. tryoni’.