Posted at 07:55h in OliveCare by Australian Olives

Most Australian packaged foods including olive oil and other olive products are ‘priority foods’ for the purposes of CoOL labelling.

Standard origin claims are used to communicate the location in which a food was grown, produced, made or packed. There are specific criteria that must be met for the use of each of these terms.

A food or ingredient is grown in a particular country if it:

 was materially increased in size or materially altered in substance in that country by natural development, such as fruit and vegetables or whole fish

 germinated or otherwise arose in, or was issued in, that country. This would include wheat, oats or nuts

 was harvested, extracted or otherwise derived from an organism that has been materially increased in size or materially altered in substance in that country. This would include cow’s milk, sugar, fruit juice, meat or eggs.

Produced in (product of)

A food is produced in a particular country if each of its significant ingredients were grown or otherwise wholly obtained in that country and all (or virtually all) of its processing occurred in that country. ‘Wholly obtained’ refers to foods or ingredients that originate in a country but are not necessarily ‘grown’, such as water sourced in Australia, salt harvested in Australia, or almond milk derived from Australian grown almonds and Australian sourced water.

A food is made in a country if it underwent its last substantial transformation in that country. The emphasis of this origin claim is therefore on the production of a food rather than its content.

A food will be substantially transformed in a country if it:

 was grown or produced in that country, or

 is, as a result of one or more processes in that country, fundamentally different in identity, nature or essential character from all of its ingredients or components that were imported into that country.

Foods that are able to carry a claim that they were ‘grown in’ or ‘produced in’ a particular country can therefore also safely claim to have been ‘made in’ that country. As to whether a product with imported ingredients or components has been substantially transformed, this will require a closer assessment of the processing undertaken to the ingredients in that country and its effect on the final product.

Depending on the circumstances, the Information Standard may require, or permit, a food to be labelled with information about where it was packaged. Evaluation of Country of Origin Labelling for Food 6 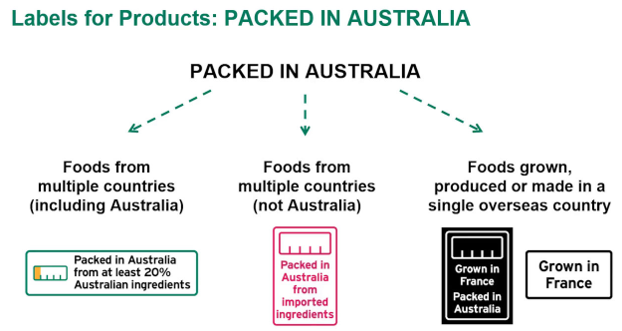 ‘Australian content’ means ingredients or parts of compound ingredients that were exclusively grown or produced in Australia.

Food that is not grown, produced, made or packed in Australia is classified as imported food. Under the Information Standard, imported priority food must, at a minimum, carry a country of origin text statement, such as ‘Made in China’ or ‘Product of Brazil’, in a clearly defined box. Non-priority foods must bear a text statement about where the food was grown, produced or made, such as ‘Product of Thailand’.

If an imported food cannot claim to have been grown, produced or made in a single overseas country, it must instead carry a ‘packed in’ statement. In this instance, the label must:

 identify the country where it was packed, and

 indicate that the food is of multiple origins, or from imported ingredients.

The Information Standard only requires non-priority foods to carry a country of origin text statement about where the food was grown, produced or made. This statement need not be in a box, but it must be legible and prominent against the background of the label.

There are seven non-priority food categories: