Posted at 12:18h in OliveCare by Australian Olives

An old favourite, summarising information on most of the possible pests, diseases and disorders occurring in the Australian olive industry. The field guide is designed as a quick reference and guide to take into the grove and use to identify pests and diseases and the damage they cause.

What to look for:

The pests, diseases and disorders are separated into 3 sections. Use the table above to determine the possible causes of symptoms on your tree; the pest, disease or disorder can then be found alphabetically in the specific section based on common name.

The following olive pests and diseases are well established (endemic) to Australia:

Olive lace bug, Froggattia olivinia (pg 30), an Australian east coast native insect pest causing serious defoliation and twig die back in heavy infestations, now widespread across Australia. The bugs are sap-sucking insects that feed on the underside of the leaf causing a yellow mottling of the leaf surface which usually turns brown and eventually drops.

Curculio beetle (apple weevil), Otiorhynchus cribricollis (pg 36), an introduced (naturalised) leaf eating insect pest that lives in the soil and climbs the olive tree each night to feed on leaves, has now spread from WA to the eastern states.

Some other olives pests: less frequently observed but can cause problems in some situations:

Locusts and grasshoppers (Acrididae) (pg 26), Australian native insect pests – swarming and non-swarming can cause serious damage to many crops including olive trees.

Adults of the Australian plague locust can be readily distinguished from other species by the large dark spot on the tip of the hindwings and distinctive scarlet hind-leg shanks. Adult body colour is variable and can be grey, brown or green. Adult males measure 25-30 mm long while females are 30-42 mm long.

Bladder cicadas range over north, central and south-east Queensland. Although they can be difficult to see because of their green colour, the old skins discarded by growing cicadas can sometimes be found on tree trunks. 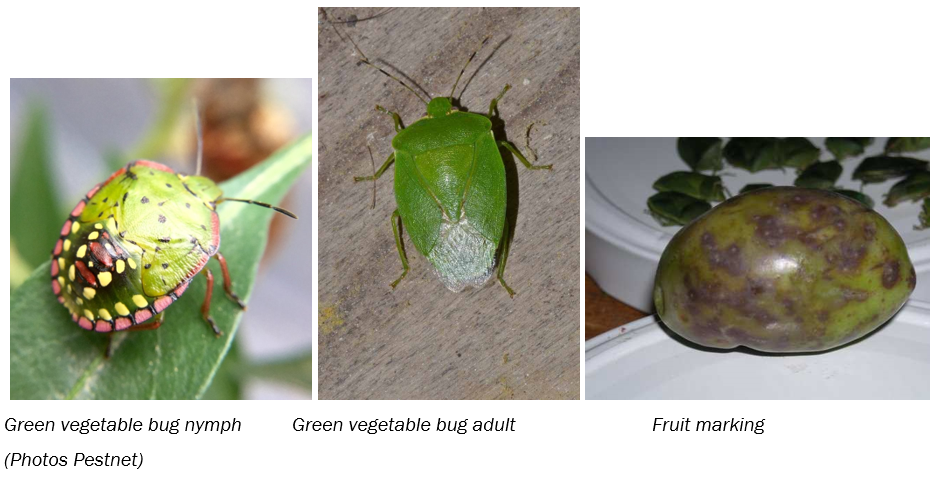 Spray Carefully, if You Must

Be sure to check out the approved chemicals for use on olives:

Biology and damage: Bud mite was first detected in NSW in 2000. The mites feed on developing buds, shoots and leaves, causing malformations and shortening of internodes between young leaves (‘witch’s broom’ effect). Most severe in young trees under conditions of warm temperature and high humidity.

Eggs: Female olive bud mites deposit about 50 eggs in their lifetime (Hoy 2011). The eggs are laid on leaves or near buds. A male mite leaves a spermatophore (package of sperm) on leaves of the host plant, which are taken up into the female’s spermatheca. Males do not need to be present for females to pick up the spermatophores and females do not need to be present for males to leave spermatophores, which is called sex dissociation (Vacante 2016). Because eriophyids display arrhenotokous parthenogenesis, fertilized eggs develop into females, but if a female runs out of sperm or cannot find a spermatophore, unfertilized eggs will develop into males (DMNC 2016).

Larvae and nymphs: The larvae that emerge from the eggs have two pairs of legs and lack true genitalia. As the larvae grow, they eventually reach the nymphal stage. The nymphs and larvae are distinguishable only by their size (Lindquist et al. 1996). Inactive periods—in which the young mites do not feed—characterize stages of the eriophyid life cycle between the larval and nymphal stage and also between the nymphal and adult stage that are called the nymphochrysalis and imagochrysalis, respectively (Vacante 2016).

In the spring, the olive bud mites move to new leaves and buds to reproduce (Knihinicki 2010). These mites will congregate on flower stalks, and can cause flowers to drop prematurely if there is extensive feeding damage (Jeppson et al. 1975). As many as 100 mites can be found per flower when population densities are high (Knihinicki 2010). Individuals will move to young fruits, which can cause the fruits to become grey and shrivel around punctures made by the mites feeding (Vacante 2016). Olive bud mites will return to the leaves in summer where populations usually decrease (Knihinicki 2010).

Most eriophyids are host specific (Graham and Johnson 2004). The only known host of Oxycenus maxwelli is the olive tree, Olea europaea L, and this mite is one of 12 recorded species belonging to the superfamily Eriophyoidea that can be found feeding on the plant (Reis et al. 2011). The olive bud mite tends to feed on the upper surface of olive leaves, though some individuals will feed on the underside of leaves when the population is high; the mites prefer new buds and leaves (Keifer 1939, Knihinicki 2010). The University of California has found that the Ascolano olive variety is the most susceptible in California, followed by the Sevillano, Manzanillo, and Mission (Knihinicki 2010).

Oxycenus maxwelli does not usually cause extensive damage to its olive tree host, and even large populations can be tolerated (Graham and Johnson 2004) (this is common with eriophyids; if outbreaks occur it is usually because natural enemies are disrupted). If an extremely high population density occurs in early spring, control treatments are suggested. Hundreds of mites per inflorescence (flower head) can cause substantial yield loss (Vacante 2016). For quick detection and removal of the olive bud mite, foliage should be examined for color changes or leaf shape distortion (Figure 3) early in the season (Graham and Johnson 2004).

According to the University of California Pest Management Guidelines, management is only required if crop yields have been below normal for several consecutive years. When this happens, the olive tree shoot tips and developing buds are examined in spring for olive bud mite presence (Vacante 2016). If large populations exist, the olive trees receive treatment before the buds bloom.

Though chemicals should be avoided to preserve natural enemies, sulfur products have been used in the past (Lindquist et al. 1996). Wettable sulfur has proven effective when applied before olive flowers bloom, but damage to the tree can occur at temperatures above 32.2°C. For high temperatures, dusting sulfur is safer to use than wettable sulfur. Spraying sulfur is another option (Vacante 2016), however this will also impact on predatory mites. Horticultural summer oils should be considered and may be less disruptive to natural enemies because they have a shorter residual time than sulfur products. Oils should be applied to well-watered olive trees when the temperatures are cooler.

Old chemistry: The Group 2B miticide ‘dicofol’ is registered in olives for two-spotted mite (a pest actually not seen or heard of in olives!): Hovever, dicofol is likely efficacious against olive bud mite but unfortunately it will also kill beneficial predatory mites. 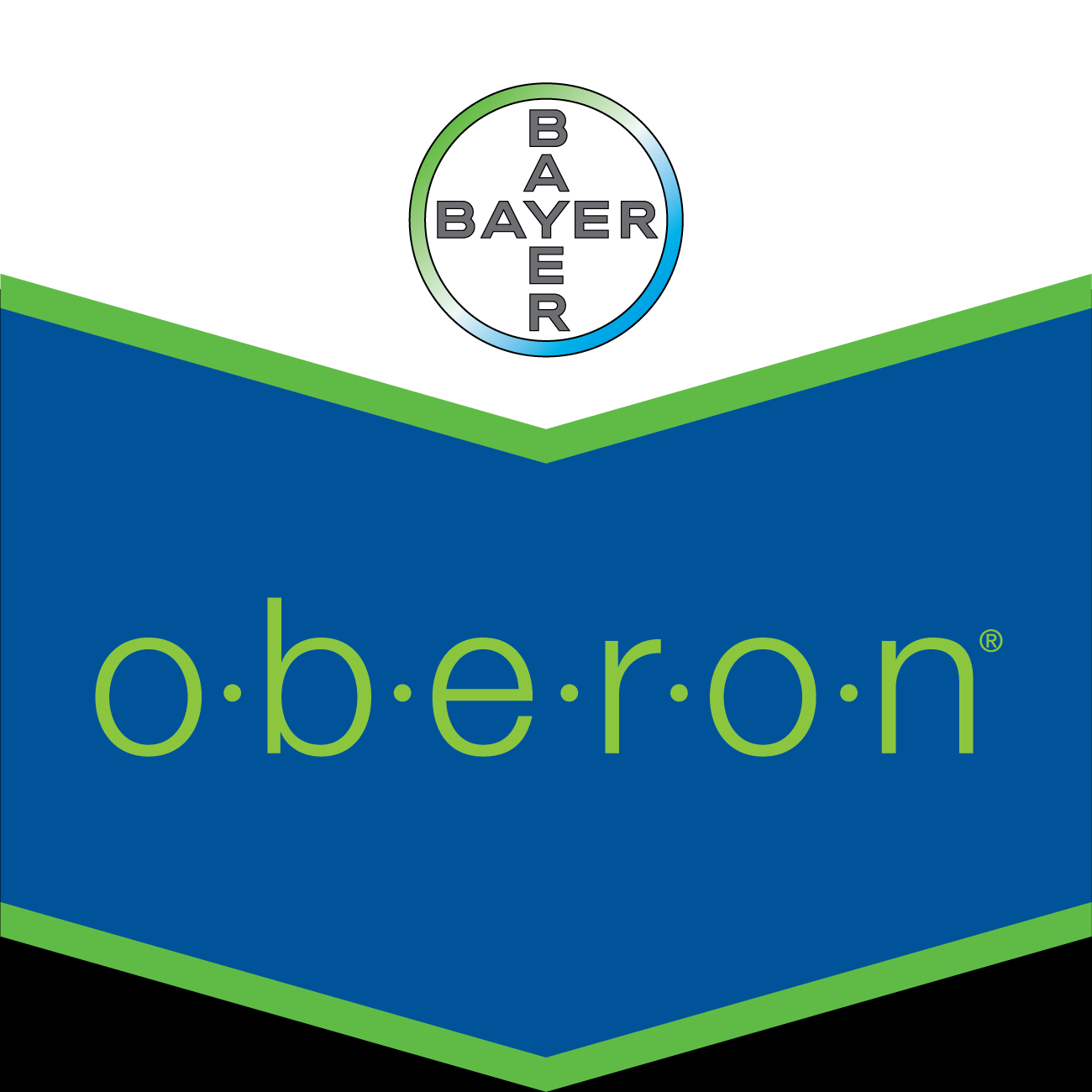 New chemistry: Hort Innovation has secured an AgVet 2019 Grant to trial Bayer Spiromesifen (Oberon) a Group 23 miticide, with the aim of securing a full label registration for use on olives later in 2020.