10 May Olive grower takes the plunge against dodgy oil imports

Posted at 01:03h in Pod Casts & Interviews by Sarina Locke 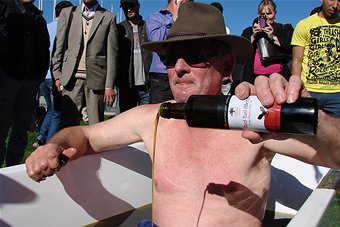 An olive grower has plunged into a bath of olive oil on the lawns of Parliament House in Canberra to protest against cheap and dodgy olive oil imports.

Richard Whiting, from Frances in South Australia, stripped down to his swimmers and claimed Australian consumers have been duped by supermarkets and the ACCC.

He says Australia has a labelling standard for extra virgin oil that’s not being enforced.

“People think they’re doing the right thing by buying extra virgin olive oil, which they are, but sometimes it’s not really what they’re paying for,” he said.

“So to that extent we’ve all been taking a bath, and I’m here to try to push the point home to the Parliamentarians, and especially the ACCC, for them to start taking some action.”

“We’ve had the Australian farmers have a 50 per cent reduction in the prices for their product. That is threatening the viability of their industry,” he said.

“We spoke to the ACCC this morning, Senator Ron Boswell and representatives of the Australian olive industry, and we look forward to Senate Estimates in a couple of weeks’ time.

“We’ll ask the ACCC what are they doing to protect consumers and protect this industry from being simply done over.”