High Priority Exotic Pests and Diseases of Olives in Australia

Posted at 17:06h in OliveCare by Australian Olives

Have you seen symptoms of the following high priority exotic olive pests & diseases of olives in your grove? Fortunately not yet in Australia, Olive Quick Decline Syndrome (OQDS) is a destructive wasting disease of olive trees caused by the bacterium Xylella fastidiosa.

Symptoms include leaf scorch and desiccation of twigs and branches, beginning at the upper part of the crown and then moving to the rest of the tree, which acquires a burned look.  There is no known practical treatment once a plant has been infected and it will eventually die.

The bacterium is transmitted between plants via insect vectors which feed on plant sap (such as the meadow froghopper). Spread of the disease over longer distances occurs when Xylella-infected plants are moved in trade.

Xlyella is currently spreading from the Puglia region of Italy to other Mediterranean olive production regions. The disease has also been detected in olive crops in California, Argentina and Brazil.

Xylella is also known to naturally infect many commercial, ornamental and native plants from more than 300 species, with this number ever increasing.

Xylella fastidiosa is one of the most significant emerging plant disease threats worldwide, and we are fortunate that it is not yet present in Australia. The vision is that Australia remains free of bacterial pathogens of the Xylella genus and is prepared to respond should the need arise. Xylella and exotic vectors have been identified as Australia’s top National Priority Plant Pest in recognition of the potential to severely impact Australia’s plant industries and environment. Managing Xylella-caused disease is economically costly. An economic modelling study conducted by the Australian Bureau of Agricultural and Resource Economics and Sciences (ABARES 2017) estimated, that if established, the potential cost of Xylella fastidiosa to Australia’s grape and wine sector alone could range from $2.8 billion to $7.9 billion over 50 years in adjustment costs and foregone gross margins. Xylella has complex epidemiology with broad genetic diversity that enables it to colonise numerous host species, and when transmitted by common xylem sap-feeding insects, it has potential to spread vast distances.

The latest research on Xylella is reported at: Conference on Xylella fastidiosa October 2019.

Public awareness video (noting that the host range has taken off this this was produced and is now at 595 species) – https://www.science.org.au/curious/video/deadly-bacteria-threatening-plants Not yet in Australia, Olive moth feeds only on olives, so in endemic regions it is present in one form or another all year round.

The first (phytophagous) generation eats buds and leaves acting as a leaf miner, which can be a problem in young trees as it harms the main sprouts.

The second generation eats blossoms and affects fruit set, but because of abundant blossoms on olive this is rarely a problem.

The moth also lays eggs in the calyx of recently set fruit, and the grub penetrates the pit, spending the summer feeding on the kernel, then in September metamorphosis into an adult.

Rarely does the moth affect a high proportion of the olive crop, and the remaining fruit are able to grow more to compensate.

Control is usually chemical or by natural predators.  In hot summers with water stress the infested fruit larvae die and the affected fruit fall off. 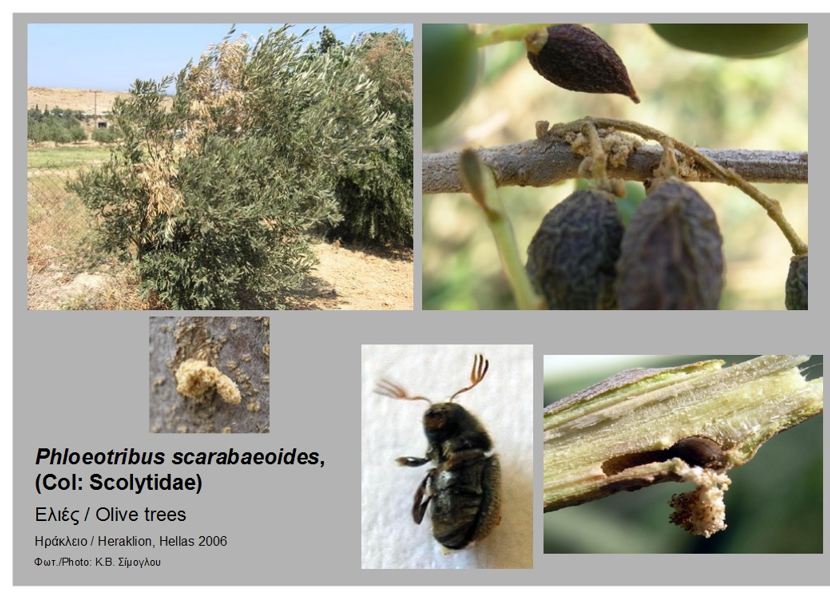 The adult Olive bark beetle spends the summer making food galleys in the axils of small sprouts, leaves and olives causing these to dry up.  In windy conditions these weakened structures often break off, reducing production for the current and subsequent years.

Adults lay eggs in spring in damaged sap wood such as in frosted trees, and in prunings on the ground.

Adults emerge from this wood at the start of summer to start a new cycle of damage.  As adults don’t fly well the damage is restricted close to where prunings remain.

Control is by proper removal and disposal of prunings and olive tree wood.  If chemical control (pyrethoids) is used it is best when the fruit has set which is the time the adults leave the wood.

Note: fallen small fruits can be confused with Boron deficiency, and distorted shoots with Zinc deficiency.

Note: The Biosecurity plan for the olive industry (Version 2.0 October 2016), is scheduled for revision in 2021/22, to take account of any new pests and diseases of olives, including the following fungal pathogens found in Australia over recent years, but not yet recorded on olives:

The following pests and diseases are now reported in Australia but not yet on olives:  Have you seen these symptoms in your grove? 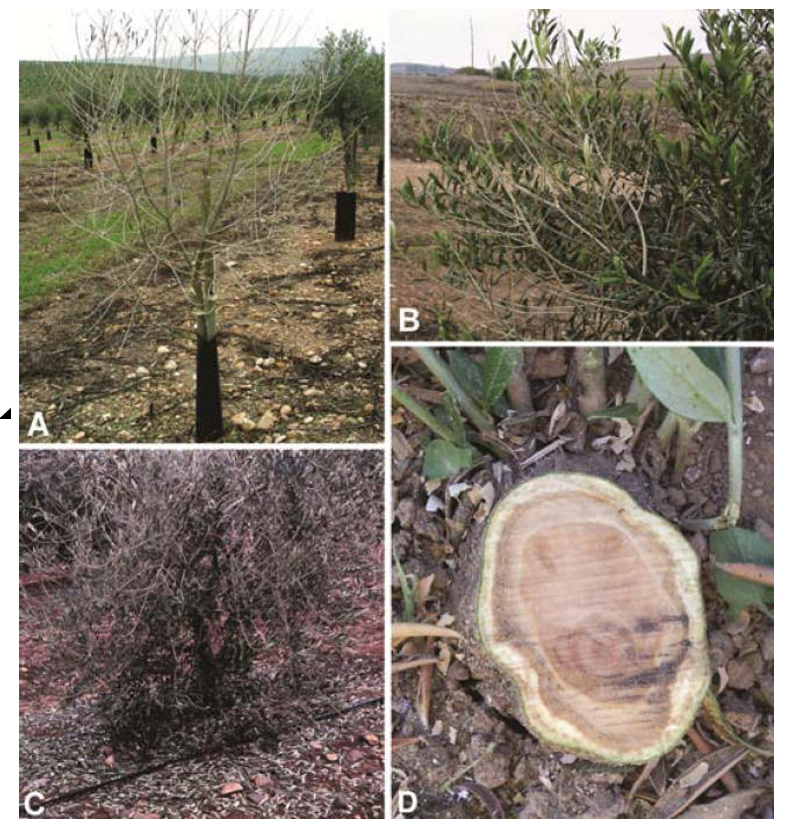 Field symptoms of the defoliating Verticillium wilt syndrome in ‘Arbequina’ olives: A, a 2.5-year-old tree completely defoliated; B, defoliation of twigs and branches in sectorial pattern; C, extensive defoliation of 4-year-old tree (note abundant fallen green leaves on soil under the tree canopy); and D, dark brown xylem discoloration in transverse section of a trunk from a Verticillium wilt–affected olive tree.

The Verticillium Wilt fungus affects the vascular system starting in the soil from spores close to a root.

Note: a whole branch is usually affected (indicating the infection is moving up the tree xylem from one or more of the infected roots. This wood should be removed and burnt

The fungus infests the tree from the roots to the leaves, and dead leaves fall to the ground containing spores to continue the cycle of infection.

Damp clay soils with high temperature are especially favourable for infection, such as in irrigated groves.  Soils high in organic matter are resistant to Verticillium due to the presence of antagonistic microorganisms

There is no way to eradicate the infection from a tree, although the tree can be nursed along with reduced watering and nitrate fertilizers, pruning and balanced nutrition.

Everyone has an obligation to report unusual plant pests and diseases.  You can do this by phoning the national Exotic Plant Pest Hotline on 1800 084 881.  This will put you in contact with your state or territory department of agriculture or primary industries. 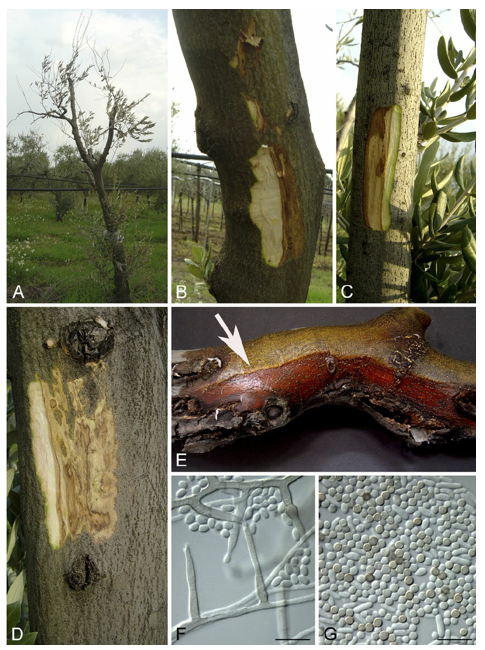 Neofusicoccum parvum is associated with general olive decline symptoms similar to Verticillium Wilt observed on olives in Puglia Italy.  It is also recorded on a broad range of hosts in Australia including Olea africana in NSW (collected 2013)

The symptoms comprised a general decline of the trees beginning with foliar browning and leaf drop, wilting of apical shoots, die-back of twigs and branches, and brown streaking under the bark of the trunk, branches and twigs. In more advanced stages of the disease necroses and cankers were observed on the bark.