Biosecurity – What’s in it for me or why should I bother?

29 Aug Biosecurity – What’s in it for me or why should I bother?

Posted at 08:38h in OliveCare by Australian Olives

Biosecurity – What’s in it for me or why should I bother?

Depending upon what it is, the incursion of a plant pest will have an impact upon the individual, others around the initial affected site and potentially the wider industry through trade restriction(s). To illustrate the latter, we need only look at the recent incursion in 2017 of tomato potato psyllid (TPP) in Western Australia. This insect pest only directly affects Solanaceous crops such as potatoes, tomatoes, capsicums, tamarillos and eggplant. However, in the initial phase of the incursion more than 60 crop species were affected by trade embargos upon produce from the affected area(s). These crops ranged from broccoli through apples to strawberries and nursery stock. 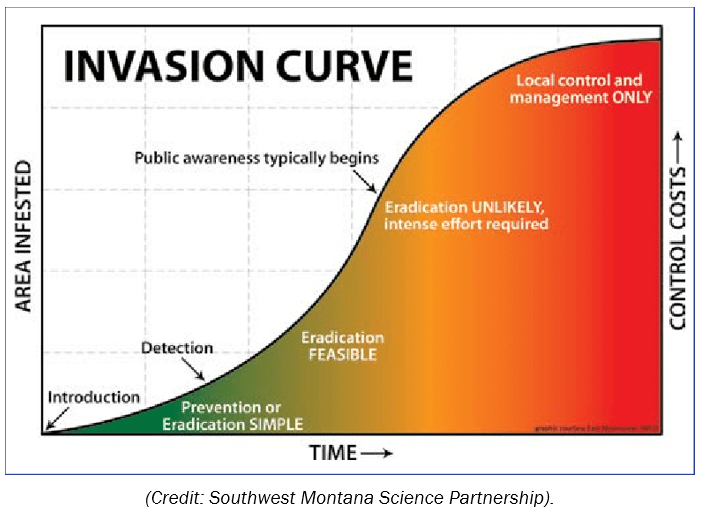 This diagram may look familiar. One of the reasons that Australia has so effectively reduced the number of cases of COVID-19 in the general population is because of the early and far-reaching implementation of social distancing.

This can be seen in an invasion curve such as the one above – the earlier that control measures are put into place, the more likely it is that these control measures will be effective, and the impacts of the pest or disease are reduced. A similar situation exists for plant pests – the earlier an exotic pest is detected and confirmed, the less chance it has to reproduce and spread. Just as we are working toward ‘flattening the curve’ to manage COVID-19, we would also aim to reduce the curve in the event of a plant pest incursion………

Because TPP had been reported on these plants in the published literature and there was concern amongst regulators and producers in other parts of Australia that TPP could be transported as a passenger on these crops, therefore trade was stopped. It took several months for this to be sorted out!

We can minimise the impact of future incursions by learning from the TPP experience that:

The last point is important because most fruit production occurs in the vicinity of other horticultural crops, such as berries and stonefruit and thus incursions in these crops may also have an impact and vice-versa.

Though you’ll find plenty of resources on the Farm Biosecurity website for creating a biosecurity plan, a plan in itself doesn’t offer any additional protection against an outbreak. What’s most important is making that commitment to assessing risks and taking action to address them.

Biosecurity is just one part of farm management, and many producers are taking some form of biosecurity action every day, according to Dr Rob Barwell.

“Many planning tools or templates recommend actions to be taken at key moments, such as when new livestock, plant material, people and vehicles come on to the property,” Dr Barwell said.

“Most of those actions may mean a small tweak or change to how you’d be managing that situation in any case, so taking the path which creates the least risk of an outbreak shouldn’t be too challenging or too onerous.”

Dr Barwell explains that many common-sense activities on farms – things like maintaining clean and effective infrastructure and equipment, practicing good hygiene, and keeping an eye out for things that have gone wrong – are all standard practice and are part of addressing ongoing biosecurity risks.

However other things that happen less frequently can also create a biosecurity risk, and should be addressed.

“What we always try to tell people is that having a biosecurity plan in place isn’t just about the document itself; it’s about actively working your way through the activities and procedures that you’ve identified, which will keep your risk at an acceptable level for your risk tolerances.”

Though having a biosecurity plan in place is a requirement of some government regulations and industry QA programs, biosecurity isn’t a status or a classification that you reach; that is, there’s no such thing as being absolutely or even mostly ‘biosecure’.

“Creating a plan is simply the first step, it’s akin to estimating what you might reasonably have to deal with on a road trip and then packing the car with the right tools and resources, so to speak,” said Dr Barwell.

“To be taking biosecurity seriously is to make it part of your farm management, make those practices second nature, and really take control of the risks that are present for your business.”

Find out more about the six essentials of on-farm biosecurity at the Farm Biosecurity website: https://www.farmbiosecurity.com.au/essentials-toolkit/