Frost and Chill Injury of Olives

Posted at 07:39h in OliveCare by Australian Olives

Late frost is one of the most important weather-related hazards for the Australian olive industry. Frost symptoms include damaged fruit, tip burn, leaf curl, defoliation, limb die-back, bark splitting, lesions increase susceptibility to bacterial (olive knot) and fungal (anthracnose) infections, and promoting suckering on the prevailing weather side of the tree trunk: 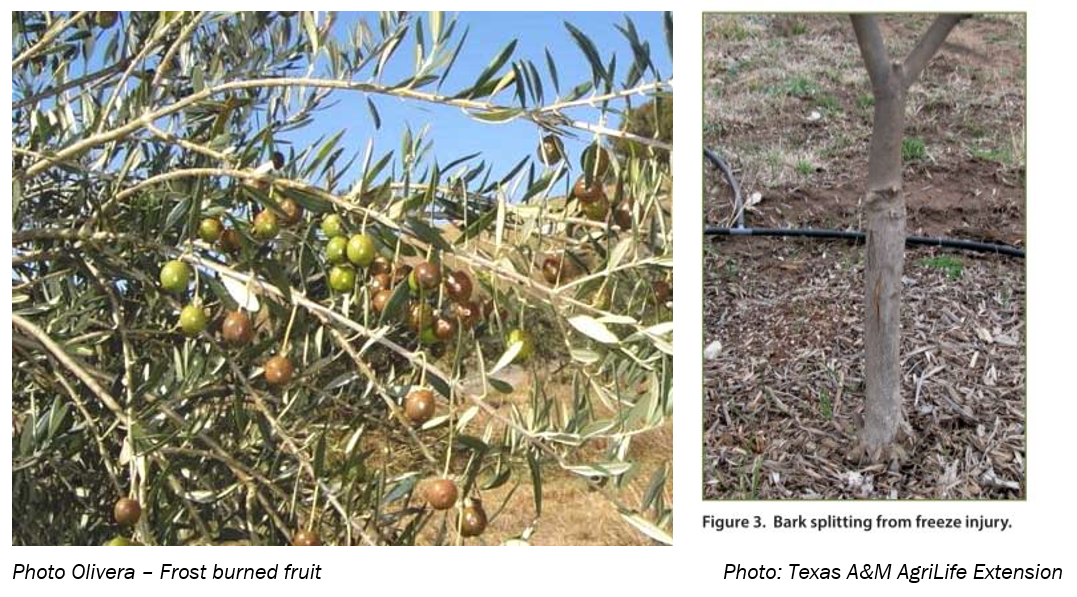 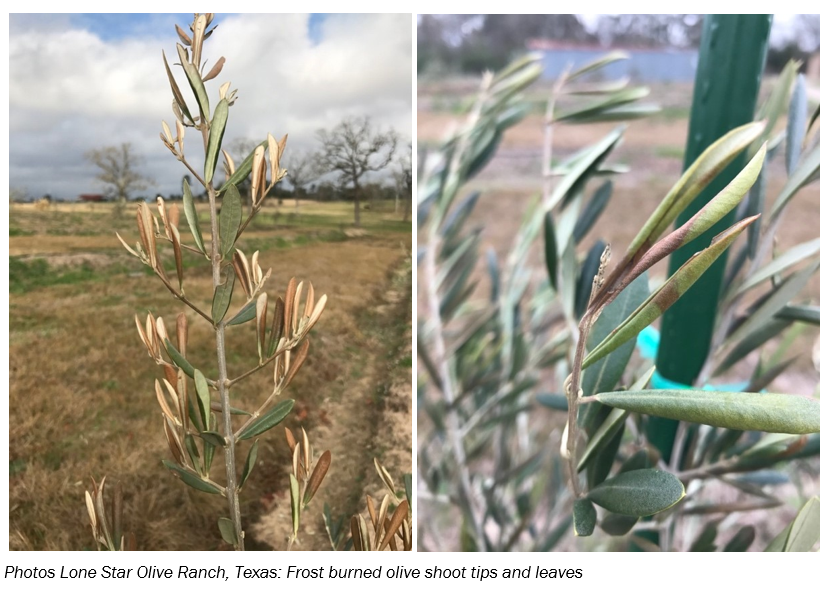 Steven Falivene: Don’t Get Burned – How to Manage Frost:

An overview of how frosts events occur and the on-farm practices that can be implemented to reduce the intensity of frosts.

According to Australis Plants: http://australisplants.com/olives/info/oliveVarietySelection.pdf

The level of frost hardiness in the olive tree is a genetic trait that varies amongst varieties.

Areas where temperatures can fall below ‐6 ̊C and snow may fall occasionally. Olive groves may be unviable in these colder climates without the use of costly frost protection equipment. Severe frost damage can be fatal to young olive trees.

Ed: Olive oil produced in cold climates will be richer in oleic acid and biphenols conferring added value to the oils.

In Australia, the varieties most commonly selected for these cold climates include: Arbequina, Coratina, Leccino, Hojiblanca, Picual and Volos.

Areas where minimum winter temperatures are generally ‐ 3 ̊C to ‐ 4 ̊C and very rarely go below ‐ 5 ̊C. Such areas are considered to be typical of the world’s olive growing regions. These areas provide the necessary winter chill requirements for optimal flower initiation and development without being so cold as to possibly damage any late season crop.

Areas which have an average daily temperature in July of 12 ̊C or less but rarely frost or fall below 0 to ‐ 2 ̊C but are subject to a traditional Mediterranean winter rainfall pattern.

Ed: Most Australian olive production takes place in these areas.

Areas that rarely frost or fall below 0 to ‐ 2 ̊C but are usually subject to a warm dry winter and spring . Commercial olive groves in this type of subtropical climate can be marginal as there may not be enough winter chilling for optimal flower initiation processes. Warm temperatures and hot dry winds during spring flowering can also be problematic. Correct variety selection for these warm climates is critical.

Ed: These areas are also subject to higher pest and disease pressure.