From the Agrifutures Australia Archives

23 Jan From the Agrifutures Australia Archives

Posted at 07:30h in OliveCare by Australian Olives

This is a status report on olive R&D reports published from 2000 to 2013, currently available on the Agrifutures (previously RIRDC) website at: https://www.agrifutures.com.au/

The AOA review of publications comprises a two-step process:

This is the third of the review reports: 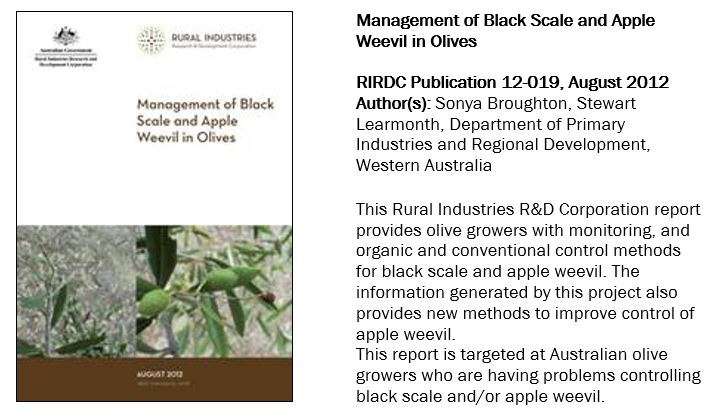 Management of Black Scale and Apple Weevil in Olives

A review of the situation as at December 2019

Information here is based on the experience of the reviewer together with interviews with WA olive growers that collaborated on this project as well as some olive growers in eastern Australia.

Black scale is still a pest of concern for Australian olive growers but the overall impression is that it is not a major threat to production. A recent (2018) Australia wide survey confirmed it remains the most widespread pest or disease (Spooner-Hart, personal communication). However, it is unimportant in some groves because it is absent or present at levels that appear to be in balance with the grove ecosystem.

Where black scale is a threat to production, most growers are confident outbreaks can be avoided through an emphasis on defining the timing of the emergence of crawlers. The crawler stage is the one most susceptible to pesticides including horticultural spray oils. See Appendix 1 for a note on monitoring the stage of soft scales, which includes black scale.

The pesticides available for use to control black scale in olives is not extensive but they are effective. See Appendix 2 for a list of currently registered pesticides.

Where intervention is required to protect trees from attack by black scale, growers target the most susceptible crawler stage (see Appendix 1) with pesticide (Appendix 2).

Some infestations of black scale are attended by ants, which feed on the secretions of honeydew provided by the scale. Ants are known to protect scale from attack by natural enemies and thereby promote the abundance of scale. There have been some reports that where ants are controlled, the suite of natural enemies of the scale are able to reduce the abundance of scale such that they are no longer a pest. In such situations, the application of scale specific pesticides is not required.

Control of ants in olive groves at present may be based on the application of the insecticide chlorpyrifos for which there is a minor use permit, or using a bait based on the same active ingredient of products used as foliar sprays to control scale directly (see Appendix 2). For use of a bait, it is important to identify the species of ants attending the scale. Growers are advised to obtain specimens of ants and send to a specialist.

The efficacy of the ant bait for use in olive groves is not known and further feedback is required to clarify this. There is a range of other active ingredients registered for use to control ants in other situations. Should ant control be required in olive groves to assist with control of scale, further investigation on the efficacy of other baits could be undertaken. The alternative approach would be direct control of scale insects as described above.

Some of the comments received in relation to black scale as a pest in olive groves:

As well as apple weevil, garden weevil (Phlyctinus callosus) has been implicated in damaging olive trees, especially during the early stages of establishing a grove. The pest status of garden weevil is regarded as minor and in any case, pesticides available for control of apple weevil are equally effective against garden weevil, albeit the timing of application is different. This and other differences between the two species have been outlined in suggested additions in the reprinting of the publication by Spooner-Hart et al (2007).

In comparison with black scale, apple weevil is less widespread as a pest in olive groves. From discussion with growers, the pest is most significant in WA and Victoria. It was reported to be of very minor concern in South Australia.

Damage caused by apple weevil is greatest in newly planted groves where low numbers of weevils can adversely affect plant growth and in severe infestations, plant survival. The weevil is less important in mature groves where in some situations, feeding on leaves, growing tips, fruit stalks and fruit is being tolerated.

Where apple weevil is a pest, growers monitor to indicate the need for and timing of using pesticide. In one case, the grower monitors weevil numbers with their capture on a trunk band of crafter’s batting fibre.

Management options for protecting olive trees from weevil attack include insecticides and physical control. A study on the use of insect pathogenic nematodes to clarify their efficacy on weevils in pome fruit orchards has been undertaken (Learmonth, 2004). Results of this work indicated they were not effective. Some notes on this topic are given in Appendix 3.

The effectiveness of insecticides in reducing the abundance of apple weevil was demonstrated in the RIRDC project being reviewed. They may be applied as a trunk drench as detailed in Table 1 or, as was the case as an output of the RIRDC project, foliar application. The trunk drench insecticide remains as the only active ingredient that is registered currently for control of apple weevil. This insecticide is available under an APVMA minor use permit, PER14791, which expires on 30 November 2021.

Table 1. Details of the pesticide registered for use against apple weevil in Australian olive groves

The availability of a foliar insecticide option, which was the case when indoxacarb was available under a minor use permit, would also reduce the pressure on getting the timing correct for the more laborious trunk drench option.

Should more investigations be undertaken on insecticide control of apple weevil in olive groves, the active ingredient chlorantraniliprole should be included. The efficacy of this active ingredient as a foliar application was demonstrated in the ‘RIRDC scale and weevil project’ being reviewed here, as was the case for other active ingredients as trunk drenches.

While the main emergence period for apple weevil is early summer, studies on the biology of apple weevil have shown that eggs are laid primarily in late summer – after a quiescence in mid-summer. The manager of one of the larger olive groves where the weevil is a pest was not familiar with this aspect of the biology of the weevil and the opportunity it affords for a longer-term benefit of insecticide application at this time, rather than only during weevil emergence in early summer. Encouragement of this later application in some groves would be worthwhile to clarify the benefit of such a later application that may result in removing the need for application(s) of insecticide every season.

For olive groves either certified organic or where they are managed under the principles of organic agriculture by choice, prevention of weevils accessing the canopy offered by a band of crafters’ batting can be enhanced through the application of a formulation containing ‘hot chilli’. For some detail on this, consult the original research report (Broughton and Learmonth, 2012).

Chinese wax scale on avocados and citrus and

This note applies to soft scales where towards the end of spring the adult female scale replaces the space under the scale covering occupied by her body with eggs. The timing for the completion of this egg production phase can be confirmed by removing adult scale – eggs will fall out like grains of sand when the female has died and only eggs remain under the scale covering. The eggs have a quiescent period after which they hatch over a period of time.

The newly emerged crawler stage of soft scales is very susceptible to sprays – both horticultural spray oils and usual synthetic insecticides. The timing of the presence of crawlers can be gauged by monitoring from November.

One approach to make monitoring easier is to place a few scale-infested twigs in a plastic/glass bottle with fine air holes in the lid. This container should be placed in an area to mimic the temperature of the orchard – not in direct sunlight and also in an area where the container can be checked regularly. When crawlers emerge, the inside of the bottle will turn brown. See the photos below.

At this time, check adult scale on the trees by removing them to confirm whether crawlers are present – a magnifying glass or 10 times hand lens will help.

Apply the first of possibly up to three sprays at this time. The number of sprays required will depend on the proportion of eggs yet to hatch. The interval between sprays should be no more than 2 weeks. Young scale will be susceptible to spaying while the wax covering they secrete is still reasonably thin.

For light infestations of scale, a summer oil alone may give control.

For a mixture of white oil and malathion (Maldison) the rates are: 230ml of a 44% active ingredient product containing malathion (for example FYFANON 440 EC insecticide)/100litres plus 1.3 litres of summer oil/100 litres. Note for olive growers: Malathion is not registered for use on olives. 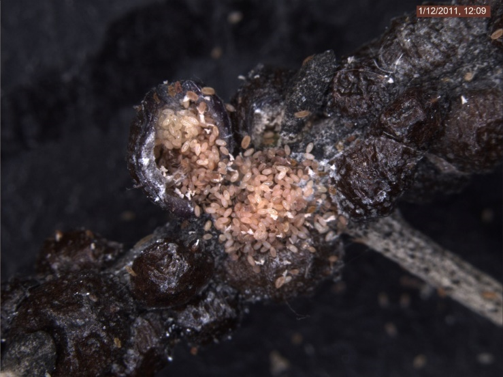 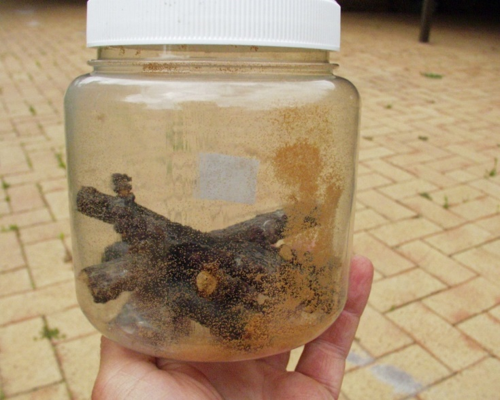 Notes on insect pathogenic nematodes for control of apple weevil