Posted at 14:27h in OliveCare by Australian Olives

The AOA has made substantial input into the EU Free Trade Agreement negotiation process and is working with the Australian Government to maximise opportunities and minimise any impact the EU-FTA might have on the olive industry, including Geographical Indications (GI’s), including the proposed EU Protected Designation of Origin (PDO) “Kalamata”, whereby use of the name required all steps of production take place in the delimited geographical zone of Messinia (Greece).

The Australian Government has made no commitment as yet to protect EU GIs. Any commitments on GIs in the FTA will depend on what the EU is prepared to offer Australia, with regard to market access.

Kalamata is a dual purpose variety – with its large fruit size and moderate oil content is suited to table olive production – whilst the oil is of high quality and useful for blending, not many olive growers produce Kalamata EVOO – the largest is Dandaragan Estate in WA

A preliminary scan of producer websites reveals that there are at least 48 Australian olive producers situated across the country – mostly in WA, SA, VIC and NSW, currently using the term “Kalamata” to describe the variety of their table olive products, and at least 4 that produce a Kalamata EVOO.  There are also at least 7 Australian producers that describe a “Jumbo Kalamata” product:

Modern Olives: Jumbo Kalamata is not a true Kalamata variety but has been known by this name in Australia for many years. It is most likely the “Oliva di Cerignola” from the Puglia area in Italy. This variety is very demanding regarding cultural care. It is used primarily for green table fruit and is regarded more for its size than the quality of its fruit. The fruit is very large with white lenticels. Jumbo Kalamata comes into bearing early, is partially self-compatible and ripens early in the season. It is not considered cold tolerant and is sensitive to scale. It has a low oil content.

In support of the Australian industry position on EU-GI’s AOA argues there is in fact a spectrum of uses of the term “Kalamata”:

Ελιά Καλαμάτας (Elia Kalamatas DOP)  “Kalimata PDO”  “Greek Kalimata” – The Kalamon variety grown in the Messina region of Greece – a black olive prepared by the traditional method in brine with herbs, vinegar and olive oil – which the EU is seeking to protect 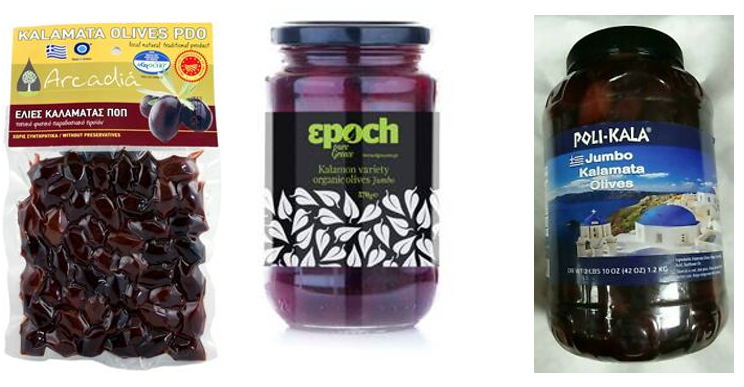 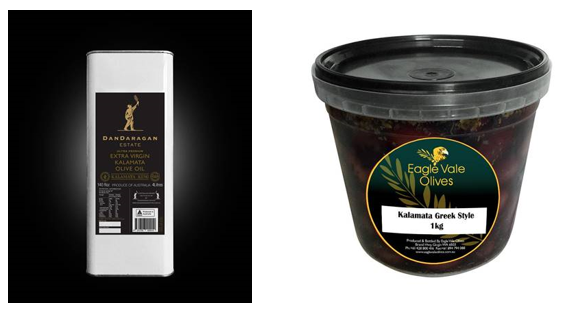 The following are some example of the use of the name “Jumbo Kalimata” or “Jumbo Green Kalimata” in Australia – applying to olives that are not true Kalimata:

Blond Kalamata: There is another Kalamata like variety known in Australia as ‘Blond Kalamata’, however in Greece these are called “Blond Olives”: 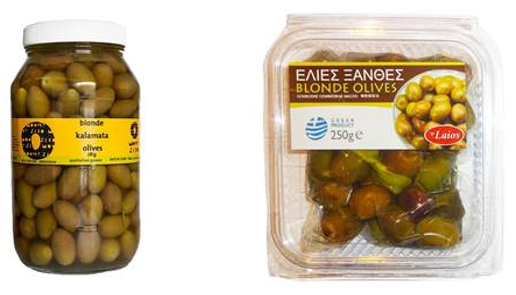 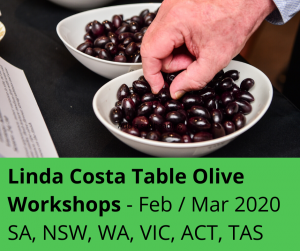